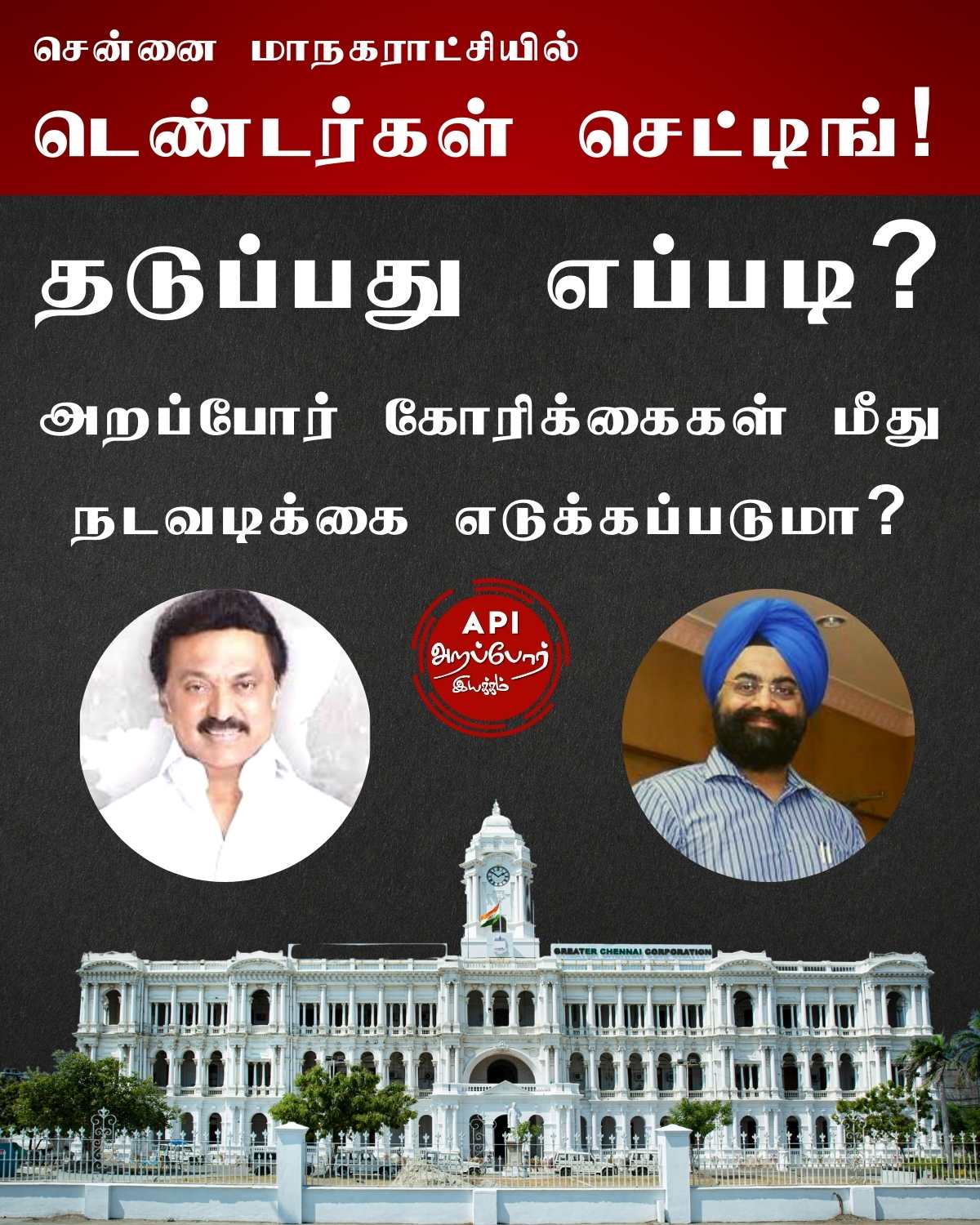 Sub: Issues regarding Tender works to be addressed

Arappor Iyakkam is a citizens movement working towards Transparency and Accountability in Governance. Over the last few years, we have been pressing for a lot of systemic changes in Chennai Corporation, the lack of which has been resulting in huge losses to the exchequer. I am listing some of the key changes required.

1. Handing over Tenders at market prices:

C. Handing over tenders at abnormally high and low rates:

We request you to immediately do a revision of scheduled rates and market rates and this will save the exchequer a huge amount of money. Such an exercise will be impossible to do with Engineers such as CE Nandakumar and others who were responsible for such an act of collusion, commission and ommission. It is equally important that Departmental action is initiated on all the Engineers responsible for these huge losses to the exchequer and Corruption that took place.

Corporation has been handing over a lot of tenders over the last few years under the garb of limited tenders to syndicate Corporation. I kindly request you to take efforts to strictly implement open e -tenders for all requirements except for very of contractors in Chennai small amounts.

In the tenders website, www.tntenders.gov.in, thousands of Chennai Corporation tenders for which even work has been completed are still showing as Tender to be opened' or Technical bid stage' etc in the website. Therefore, Engineers of Chennai Corporation seems to have found a way to avoid transparency and not let the public know about the financial bid and the Letter of Agreements. The system is set up in a way that immediately after Corporation Engineers open the tenders, it should reflect in public making it impossible to fudge these tenders. However, they have made this process irrelevant and redundant as well. I request you to kindly fix this loophole and also ensure that all Engineers display the tender information in public as mandated for all the completed tenders as well as future tenders.

The tender bulletin book is an important source for looking at all tenders Corporation has announced. However, there has been many instances of not publishing all the tenders in the tender bulletin. I request you to immediately correct this.

We have brought about several instances of the past where in EMD has not been accepted from Engineers restricting the competition to syndicates of contractors. We immediately request you to make EMD payments online as soon as possible. Your recent letter to DC (Works) on the same is welcome and we request you to implement it soon.

7. Doing away with al physical points of contact in tenders:

There has been many mechanisms that are being used in Chennai Corporation to ensure physical points of contact in tenders inorder to prefix them. Machinery certificates from Engineers, submitting of design / drawing to Engineers etc are few of them. Therefore, I kindly request you to order that there shall be no physical points of contact before the completion of tender process.

8. Doing away with Packaging of Tenders:

In the past, there has been the practise of packaging huge number of roads, storm water drains for many roads into a big package. While Chennai Corporation has been claiming that packaging brings about quality, the reality has exactly been the opposite. The packaging system has resulted in syndicates of Contractors taking huge amount of tenders at way above market prices and carrying out only few items of the tenders. They have carried out substandard quality work. For example: in 2018, Arappor lyakkam pointed out several places where the gap between steel rods in storm water drains were 11 inches against the mandated 5.5 inches. The fact that these huge contractors work in collusion with Chief Engineers at the top make it almost impossible for the Assistant Engineer or the project management consultant on the ground to make contractors accountable to the specifications. Building roads and storm water drains are not rocket science and can be done by most contractors with a proper monitoring mechanismn. Therefore, this system of packaging anything and everything in Chennai Corporation needs to go. I request you to take immediate corrective action towards the same.

There has been several tenders in the past where people even without the prequalification criteria were allowed to do the work. Many contractors who did work in the past were alleged to not have the required bid capacity at all. Yet the scrutiny committee in collusion is said to have approved the tenders. I request you to take action on such officials and contractors. Also, kindly ensure that this doesn't happen in future.

We have exposed hundreds of crores of tenders where related parties alone have participated. Related parties such as Husband and wife alone participating in tenders (Gurumoorthy Engg enterprises and GG Tmfrastructure), brothers alone participating in tenders (Thomas Ivadurai Infrastructure and RTI foundation), mother and son alone participating (Vardhan Infrastructure and KCP Engineers Pvt Ltd) etc have shown how bid collusion takes place. It must be noted that these people also had also uploaded tenders from the same IP address. Etforts must be taken to explicitly mention in the bid document about conflict of interest, related parties, common directors etc being ineligible to bid as they directly result in anticompetitive behaviour.

We have brought out several instances of how roads in very good condition were selected for relaying wasting exchequers money. There have been several footpaths in the city which were in extremely good condition that were replaced and built newly as well. Therefore, efforts must be taken to judiciously check if a work is really needed to be carried out.

13. Road Height to be maintained:

Raising of road heights in Chennai have caused huge issues to citizens as their houses have gone beneath the road. During monsoons, this results in rain water entering households causing huge hardship. The recent announcement of the Chief Secretary through a letter to Highways Department that the road height needs to be maintained is welcome. In Chennai Corporation, even though there has been some positive changes after we questioned the Corruption in milling, there are still many problems. In Concrete roads, no milling is being done raising the road heights. Also in specifications for many tenders, the milling level should be equal to the level of the road being laid which is also not being done. Therefore, I kindly request you to pass orders to not raise road heights and also ensure it through proper specifications in tenders.

There has been several issues of quality such as bitumen level, quality of tackcoat, quality of readymix concrete used etc. The quality control wing that found out huge discrepancies when Joint Commissioner Vijay Pingale IAS was in Chennai Corporation in 2015 has becomee dysfunctional and redundant. The project management consultants at many times also collude with the contractors and officials of Chennai Corporation. Therefore, an independent quality wing with people of integrity is extremely important to access quality and make contractors accountable for specifications.

Several sections such as section 3, 5 etc of Chennai City Municipal Corporation Act, 1919 has been amended in 2010 to enable formation of ward committee and area sabha. However until date, no efforts has been made towards implementation of the same. It is also equally important to amend the act further so that people participation and decision making is taken more directly into the hands of people as per the Model Nagara raj bill. We request you to take steps to immediately implement the amendments made in 2010 and also take steps to amend the act further to strengthen it more.